Missing all images on page 2

The show looked very attractive as always, but in a perfect world would be scheduled for a dryer month like April for example…  February is historically the wettest month for the Bay Area which I feel affects attendance most years.  You practically need to be a diehard art lover to journey to San Francisco’s Fort Mason during rain storms.  The exhibitors must set up and break down their exhibits in the rain as well, which can make the experience less than pleasant.

As a general rule many of the tribal dealer’s booths are located in the front half of the venue.  As you strolled past the food court however, the show became disjointed and an mishmash of dealers selling other-than-tribal-items, which I don’t cover here.  Tribal dealers that are still located in the back should try to reposition themselves forward, in my opinion.

Regarding the status of the current “market” climate, you can read my previous reviews which discuss that at length.  Little has changed economically so there is no point in being redundant here.

The composition of dealers pretty much mirrored the “market” at that moment in time in San Francisco.   When there was a stronger market (not too long ago), we would correspondingly see more top dealers entering the show with strong material.   It may be that the show cannot afford to lose anymore European dealers and still maintain its perception of quality.   In the past European dealers would buy from American and other dealers, which was positive.  With the quality they often bring, they satisfy many a collector’s appetite for great material.  As it stands the European dealers may need to be lured back by the promoters.  The euro is high creating a disincentive to sell in dollars and the show costs them around $10K or more (Booth, airfare, hotel).

I personally noted or was told that staff from every auction house in the States were there except Sotheby’s.  Also in attendance were local museum curators as well as others from around the country.

Many dealers who have exhibited here a decade or more, said they would be satisfied if they sold half or even a third of the sales they had prior to 2008.  From the “sales aspect” there is a rotation of success and pain at this show.  One year might be good and the next bad. It is never consistently good, unless you have very loyal adoring customers (two dealers -only- come to mind).  From what I could tell, the dealers who have stuck in there year in and year out are now being rewarding with business, since many of the familiar names and key players are out.  In terms of high value sales I only heard of one.  I could be wrong but I feel their were few sales over the $25K range.

The opening night, hosted by the De Young, is an impressive shindig but seldom translates to sales for most dealers.  Dealers get frustrated watching people hardly leave the food court.  Who can blame them for $150 ticket though.  For most people that attend, it is not about art but about schmoozing, food and drink which is damn good, btw.  In my view it is all about sales for the dealers however.   I think the best way to boost sales for them would be to diminish or eliminate the lavish Thursday opening event and open the show to everyone on Friday morning for $10.  There would be much more excitement, pent up demand, lines to get in,  and yes even  competition between customers which directly benefits the exhibitors.

Keeping it positive I really enjoy “shopping” at the show instead of covering it.  There were some great quality things there for reasonable prices.  Some of the astute non-exhibiting French dealers were making purchases and enjoying the strength of the Euro, but not many.

Okay, lets check out some photos.   Note: these images only represent a small sampling of dealers and pieces found at the show.  I’m just serving you a “spoon” from the soup bowl. 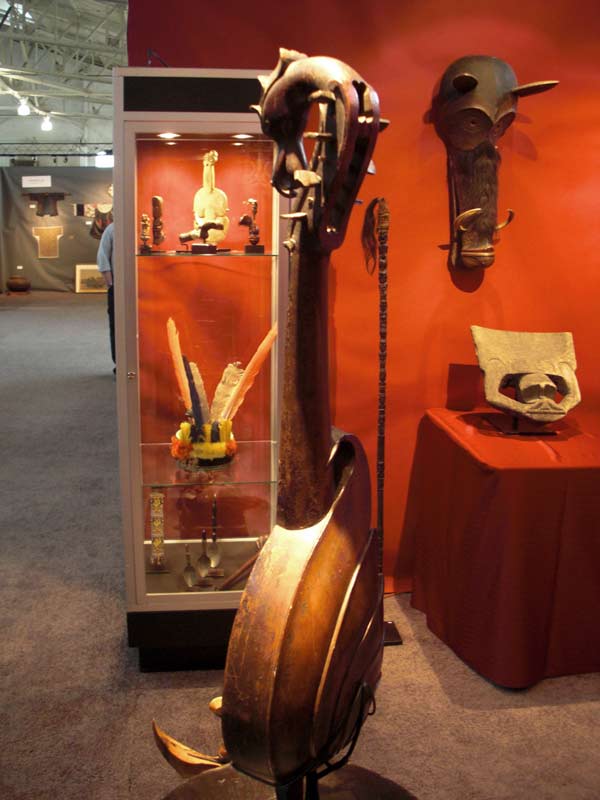 James Willis with an Akan maternity figure from the Ivory Coast

Vicki Shiba (opening night) discussing an Indonesian ritual Sarong from the Ngada people of Central Flores.    A wide selection of masks too.

Dave DeRoche and Jo De Buck’s booth in the front entrance.  Jo De Buck and Cole and Harrell in the background.

DeRoche, with a couple Sepik maskettes

Peter Boyd with an Angolan figure

My favorite part of the show was the exhibit in the foyer consisting of Bay Area Artist Mort Golub’s contemporary mask creations which were inspired by masks from the Himalayas and Indonesia.   I really like much of what he is creating.  Every piece has a soul, even the most abstract masks!  I hope this is the jumping off point for Mort into deserved “branding” by the art community….  Next to the shield exhibit (years ago), it was the best exhibit in the foyer I can remember.   The Himalayan masks were owned by Thomas Murray the curator.

Some felt it could have been a more inclusive exhibit where masks were culled from various dealers.   Tom told me he originally proposed that Idea to Elizabeth Lees but she understandably nixed this option because it added an insurmountable level of complexity or an already challenging exhibit.

To be honest I blew past most of these foyer exhibitions past in years, but I kept coming back to this one. After seeing a body of Mort Golub’s art again, I really got  just “how” inspired he is.   Wow!  I found the exhibit to be a rich art experience.  Mort has been represented continuously by Cavin Morris Galley for 10 years.  I wish them much more success going forward.

“Through an internal creative alchemy he would transform these discarded shards of our consumer society into compelling visionary art.  And as his body of work grew, it became clear that something very special was happening: Mort had gone from collecting art to making it”.  And the art he was making was not only good, it was truly inspired!

I think the exhibit achieved its goal of “telling the artist’s story while introducing his art to a whole new audience which may be unfamiliar with Mort Golub or the masks from various lands that inspired him.”  Taken from the San Francisco show catalog article:  “Transformation Masks and Artistic Metamorphosis” by Thomas Murray.  I recommend getting a copy from the promoters.

In the future it would be a great idea to use this foyer exhibit space for outreach and education to appeal to new collectors, as I felt this exhibit did.  Other tailored exhibits and maybe some lectures could go a long way in helping to broaden the market and build collectors.   The new buyers, I’m occasionally meeting, do not collector tribal art per se but are instead buying as an enhancement to an existing collection of modern and/or contemporary art.

Mark was telling me that Luba mask on the wall is Ex. Willie Mestdagh.  (Photo Brian Nault)

Amayas Naegele (New York) with a textural and graphic leather cape from the Turkana people of Kenya.  Applied knotted fiber tubes secured with stripes of hide.  The projections were probably once anchors for hundreds of ostrich plumes.

(Amayas Naegele) A flamboyant  man’s beaded corset from the Dinka people of Sudan.  He showed me, as a base-maker, what he had to do for the piece to keep its form.  Pretty impressive.

Wayne Heathcote and company.  As I recall this was a New Guinea Pre-Contact neckrest from the North coast region.

Arte Primitive- NY.  Great piece but poor photo of an Olmec Shaman in a trance

It was good to see Jonathan Hope from the UK join the show this year.  He and Rudolf Smend were exhibiting a fine quality selection of textiles.

(David Zemanek) A 19th C. Eket Figure (Nigeria) from the Webster Collection.  See inscription on back.

(right to left)  Neil Becker, Kip McKesson and his wife

Wayne has not been in attendance for several years but the booth is staffed by Jack Sadovnick and Wayne’s brother Volker.  They likely had the strongest sales of the fair.  You’ll notice to the right of Volker (far right) is an Indonesian Tau tau figure from the Toraja people of Sulawesi.  Its worth noting since there was a buzz about its fine quality.  I understand it sold quickly.

(Mark Johnson) That colorful object is a Iban-Dayak ceremonial Hornbill bird effigy.   It is one of the most elaborately made art types in Indonesia.

Alain Naoum, with a Lwalwa mask

(Joe Loux)  I like the elongated face and serene countenance

Ina of Insite Antiques & Design.  A Bamileke stool from Cameroon– quite a good one too!

Patrick Mestdagh- Brussels.   The maestro’s booth is like music notes.

And ending on a happy note….  Lin Willis and Feelie Lee (Right)